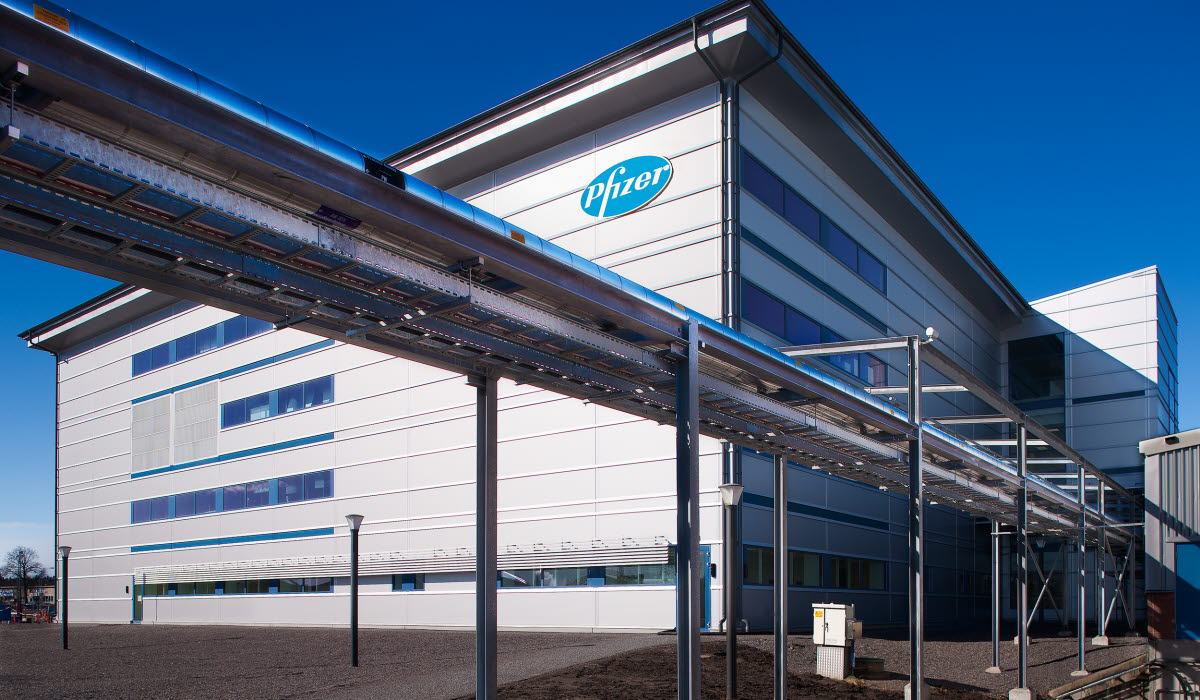 World’s largest biopharmaceuticals company reinforces its biotechnology plant in Strängnäs, Sweden – investing €35 million to double capacity. “We are growing on all fronts.”

When Pfizer inaugurated its cutting-edge 6,000 sqm biopharmaceuticals manufacturing facility in Sweden in 2009 – following a €150 million investment – the primary objective was to ramp up production of its best-selling healthcare product, a growth hormone that stimulates cell reproduction.

Now, a decade later, the American pharma giant is not just celebrating major achievements in Sweden but is already embarking on the next growth phase.

“Visitors to our manufacturing facility often ask if anything is produced here at all. The facility is very clean and tidy with just stainless steel tanks and control rooms visible to the eye,” says Helena Thelin, Site Manager at Pfizer which is based in the town of Strängnäs, some 90 km west of Sweden’s capital city Stockholm.

Contrary to this perception among visitors, Pfizer’s Swedish biotech plant is bustling with activity behind the scenes as a €35 million expansion gets underway in 2019.

Pfizer’s goal this time is to double the production capacity for all products manufactured at the Swedish site. These include growth hormone and active drug substances for a thrombosis drug, as well as a drug manufactured on a contract basis. But that’s not all.

“We also have a new Pfizer vaccine coming into our portfolio this year. This vaccine is for active immunization to prevent meningococcal disease. Flexibility is key as we are growing on all fronts in Sweden,” Thelin continues.

The application of biotechnology in healthcare has showed some breakthroughs in the past decade with remarkable success. Using biological material such as living cells or tissues, biotech has unlocked targeted therapies matched to human DNA, new vaccines and more efficient drug manufacturing methods.

With 12 biotechnology plants worldwide, including the Swedish site, Pfizer is in the vanguard of progress in the field of so called ATMP (advanced therapy medicinal products) which also includes gene therapy, or gene editing.

“People are living longer and we see a rapidly expanding global middle class across regions such as China and Africa. Consequently, we are experiencing growing demand for high quality medicines.”

Scaling production in biopharma is not so much about installing new technology or beefing up machine capacity. Instead, the way Pfizer doubles its output is by shortening the time it takes to clean the bioreactor system between each batch of active substances.

In this effort to optimize, Pfizer in Strängnäs has recruited and built expertise since 2017 and used digital simulation tools to address bottlenecks in the cleaning process.

“Most of the people we are recruiting are highly skilled automation engineers, process specialists as well as operators. They need to be experienced enough to work proactively with living organisms which are sensitive to factors such as temperature and pressure changes,” says Thelin.

“Working with biological material is a high-tech discipline where Sweden has a strong tradition, particularly in process automation but also when it comes to finding operators who can handle today’s data requirements. Each step of our production process is carefully monitored and documented.”

The Mälaren Valley of Sweden offers world class expertise in biotech manufacturing largely due to the decades-long legacy of Pharmacia, the Swedish company that Pfizer acquired in 2002 in a $60 billion deal.

Pfizer’s continued investments in the region proves that the innovation spirit is more alive than ever. Over the past five years, the Swedish plant has expanded from three to five products and increased its staff from 210 to 290 employees.

“We have increased our workforce by almost 40 per cent since 2014,” Thelin points out.

Apart from doubling the capacity in Sweden, Thelin expects the Strängnäs site to be a strong contender in helping Pfizer to achieve its bold vision of launching 25 new products by 2025.

“The majority of Pfizer’s biotech plants are located in Europe and the Swedish facility has already proven to be a reliable supplier to global markets. We have skilled automation talent in the region and we own plenty of land around the existing site. This puts us in a favourable position for future opportunities in the biotech niche,” she concludes.

Pfizer is one of the world’s premier biopharmaceutical companies with more than 97,000 employees. Headquartered in New York City, USA, the company merged with the Swedish biopharma manufacturer Pharmacia in 2002. Pfizer currently operates more than 60 plants worldwide.

Pfizer’s Swedish plant is located in Strängnäs and has 290 employees. It is one of Northern Europe’s most advanced biotech facilities and focuses on growth hormones, growth hormone suppression, antithrombotic agents and vaccines.