"Swedish companies have a head start" 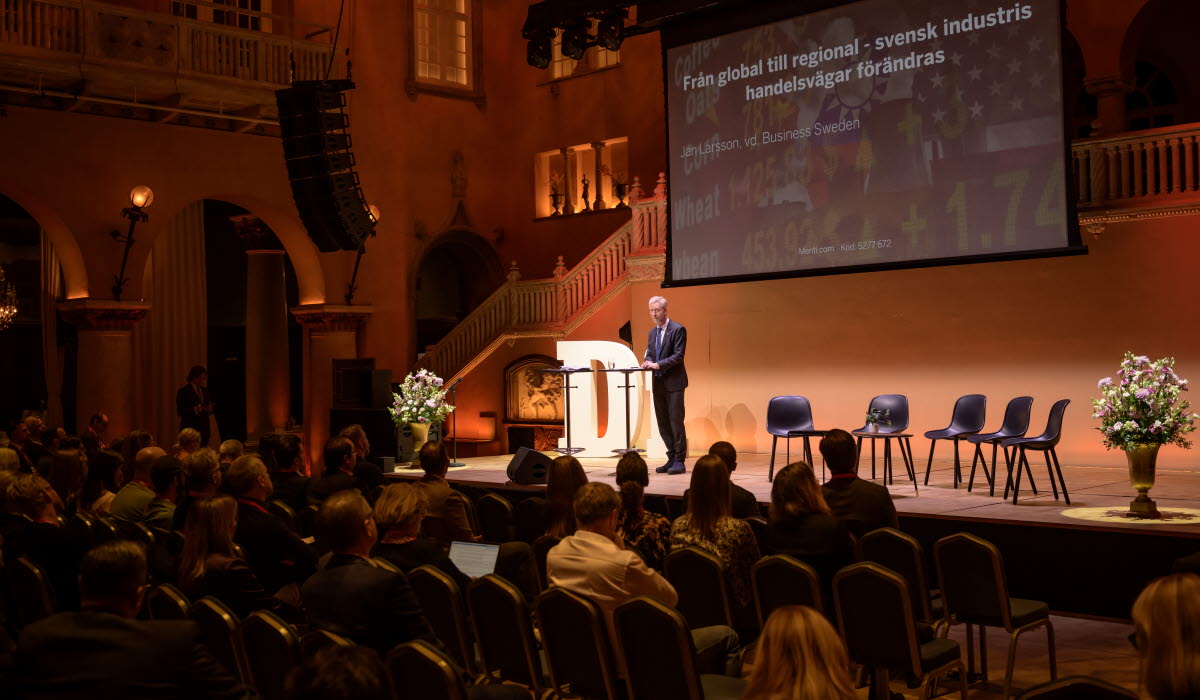 On 17 January, Dagens Industri hosted the Di Världen conference in collaboration with Business Sweden. Our CEO, Jan Larsson, gave a speech in the Winter Garden at the Grand Hôtel on the theme: From global to regional - Swedish industry's trade routes are changing. How is Swedish business to secure its value chains in a world that is becoming increasingly uncertain? Hear his insights and read the full speech below.

Do you remember what it was like 23 years ago? When the world went from the 20th century to the 21st century. Turn of the millennium.

I remember it because I had the somewhat odd profession of speechwriter at the time. It was Christmas Eve, and I was free to write on the theme of centuries and millennia. And I certainly turned my passion into it: The century of war was behind us. The century of democracy was here. The inflationary economy of the 80s was gone, free trade would contribute to development, democracy and peace. We had overcome the energy crisis of the 70s.

It was optimism and joy - it was trust in man and faith in reason.

Oh, how naive I was. For now, 23 years into the millennium, the outcome is terribly bleak.

Today, this feels like a gloomy – but still an everyday life. Just a few years ago, all these simultaneous events would have been seen as a completely improbable perfect storm.

And I have not even mentioned the climate crisis. Or the risk that the Western world is heading into a long recession.

It is difficult. And it is important. Half of Sweden's GDP comes from exports. Half of those exports are produced by foreign companies. Sweden is just as small and export dependent as we have learned since childhood. And with 75 percent of Swedish exports to the rest of Europe, we are vulnerable. Much of the uncertainty that exists in the world today revolves around our continent: The war is here, the energy crisis is here, inflation is here - and the risk of falling into recession is higher here.

Despite this perfect European storm, we at Business Sweden expect that exports will not decrease. An unchanged situation is, in its view, a dismal bump in the curve, but it could have been much worse. That is proof of the strength of Swedish companies. And we see that they do not sit back. They act, and they act wisely – in many ways, let me point to a few.

One. Swedish companies are innovative. A few years ago, McKinsey did a survey of the world's business leaders. 85 percent said innovation was critical to their company's future success. Then the survey asked the business leaders if their company was good enough at innovation. Only six percent answered yes. The difference is 79 percent. Four out of five company leaders thus feel that they are not good enough at something that will be crucial for their future.

And what will those business leaders do? Some will try to acquire innovation by buying disruptive smart companies. It can work - but is difficult. Because innovation is so much culture. And an acquired disruptive company quickly becomes part of the large company's culture - and then easily loses momentum.

Therefore, more and more companies have instead changed their view of subcontractors and other partners in business life. From forcing subcontractors to lower their prices every year to contribute an additional hundredth of ROE (Return on Equity) - to seeing them as strategic partners. As someone who must be allowed to grow and develop. Who need a margin to be able to nurture his or her disruptive and creative ability. The relationships in the value chains become strategic collaborations.

Moreover - all those CEOs who find that their innovation power is not good enough will naturally wake up sweating at night with worry - and then come to work and let loose R&D departments and engineers. And then they will need a goal and purpose for the development of their businesses. That leads me to the second reason to feel hope and faith in the future of Swedish business life.

Swedish companies are at the absolute forefront of sustainability and climate impact.

Fifty years ago, Sweden organised and was host to the world's first global environmental summit. Almost 20 years ago, the government invited researchers and business to the so-called Oil Commission to investigate the opportunities of creating an "oil-free society". That was before we talked fossil-fuel free.

And Sweden was the first country in the world to create a carbon tax.

So, CEOs now get questions about sustainability and control over supply chains after every quarterly report. Then the issues are quickly raised to management groups and boards.

Swedish companies have a head start. This means that both Swedish goods and Swedish production locations are attractive when production and goods steer towards the sustainable.

Sustainability also impacts value chains. Almost 70 percent of the companies we have asked say that they place more importance on the delivery distance to Sweden. Shortest transport wins.

In those surveys, it is also clear that Swedish companies are on their toes when the world around them changes. That is the third reason to feel hope:

Swedish companies are agile and adapt to the new world. They are looking more and more for a broader supplier structure - and they turn their eyes upon Europe. Firstly, they consider Eastern and Central Europe. Secondly, Western Europe.

Swedish companies are of course not alone in this development. Other European companies draw the same conclusion. Many of them have started to look at Sweden as a new production location – or Swedish companies as new suppliers – for the European market.

This reshoring is a huge opportunity for Europe and for Sweden to attract new production, new workplaces and new growth.

But development goes both ways. Asian companies think the same way – and do the same. In 1990, only 25 percent of goods sold in Asia were made in Asia. Today, the proportion is over half.

It is not sure we will get the production when it moves home. Here too, the success factor for Sweden seems to be sustainability. Almost all major foreign investments in Sweden in recent years have dealt with climate-smart solutions in one way or another. Electric motors, batteries, fossil-free steel, smart food production.

Reshoring is of course both wise and rational in many ways. Cheaper, safer, faster – and more environmentally friendly. A dear child has many names. Backshoring, inshoring, nearshoring, onshoring. I can live with them all.

But when the word that is used more and more often is "friendshoring", I get worried. Because it only makes sense to talk about friends when there are enemies. And if trade and business begin to differentiate between friend and foe, then we will quickly be drawn back into a time of contradictions, conflicts, and closed borders. Furthermore, it breeds a cold war mentality that will not benefit either jobs, growth, or sustainability.

And that is my fourth observation of the success factor of Swedish companies.

Swedish companies are often balanced in their view of the outside world and geopolitics. You understand that you cannot influence major political events - but do not adapt blindly.

There is a genuine ambition to contribute to the communities in which we operate, there are clear positions for a good working environment and human rights, there is concern for biodiversity and the environment. In short – once again sustainability is the success factor.

China is and will remain a focal point for many Swedish companies. It is impossible to neglect the importance of the country. Half of Swedish industrial companies, state in Business Sweden's surveys that they have suppliers there.

China remains a Manufacturing Powerhouse – with well-developed ecosystems in all from raw materials to advanced components.

But changes happen quickly. China has become a market of its own with strong purchasing power. Costs are increasing. Geopolitics are becoming increasingly difficult to assess. And the fear of putting all the eggs in one basket has increased.

The conclusion for many companies is that "China for the world" is slowly turning towards "China for china" - i.e. more and more production in China is needed to be able to sell on the growing Chinese market.

In the news broadcasts the other day we were made aware of perhaps the most important trend for geopolitical development in the coming decades. China's population will decline in 2022 for the first time since the famine disaster fifty years ago. No matter how hard they have tried to change the old one-child policy, the trend is not reversed. Deaths outnumbered births last year for the first time in decades.

The bleakest forecasts predict a rapid decline in China's population for a long time. And demography is a powerful factor in economic development. Young generations invest in the future. Older generations secure their old age. An aging population therefore tends to become more backward-looking and more cautious. That is not a success factor in today's innovative world.

So perhaps the most dramatic thing that happens this year - in the long term - despite all the nastiness of the war and all the frustration in the economy - is that in the UN forecasts in April this year, India will overtake China and become the world's most populous country.

In addition, India today has faster growth – albeit from a lower level – than China and a younger population. The Economist believes that every sixth person of working age will live in India by 2050.

India is not alone. There are many Asian countries that are ready to take over China's old role as a production country. Over two billion people in Asia live with a GDP per capita that is less than half that of China. Those countries show clear ambitions to want to grow through their own industrialisation – which more and more Swedish companies have understood and are beginning to take advantage of.

So Swedish companies and Sweden stand relatively strong in this rapidly changing world. But it does not come for free. We have to be on our toes.

If I were to give six simple pieces of advice to all Swedish companies that have suppliers, production, or markets outside of Sweden, they would be:

Business Sweden is jointly owned by the Swedish state and the Swedish business sector. We have a very clear mission - to contribute to jobs, competitiveness, and sustainability by helping Swedish companies to reach out to new markets and to help international companies gain access to the Swedish market. Our mission becomes more and more exciting as the world becomes more complex. We must understand and be able to help Swedish companies with growth strategies, analyses, and other management consultant-oriented assignments. But we must also together with Embassies and other Swedish stakeholders, develop and maintain networks and community contacts and participate actively in the markets where we are located - and create broad interest in Swedish goods and services.

When we combine these tasks, we become unique in what we can contribute to Swedish companies. Please use us! You find us in 42 locations in 37 countries worldwide and we can support you with all from conducting a market analysis to registering a subsidiary. From giving you the right contacts on the spot to an office to work at. From conducting a partner search to keeping the books.

Right now, we are developing both our organisation and our ways of working to contribute even more to the growth of Swedish companies globally.